Adventures in Missing the Point: A Biblical Perspective on the Growing Covid-19 Partisanship 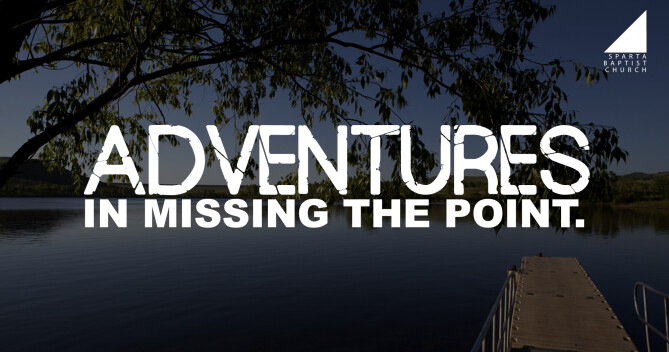 WHAT IF WE ARE MISSING THE POINT?

Thought Experiment Time
Imagine being a parent who hears arguing coming from the rec room of the house and you go in to find out what is going on. As you enter, you see two of your children, ages 9 and 11, fighting over the remote to the family’s gaming system. They are yelling at each other, both grabbing for the remote, name-calling, and being rude and mean to one another. They instantly start making their case to you - “I had it first”, “They’ve been playing on it all day, it’s my turn”, “You’re stupid”, “You’re a big jerk”. As a parent, what is the typical approach to managing the situation?

All too often we try to figure out what is fair in this situation, siding with one child or the other. We either conclude that the one who had it first has first dibs and the other doesn’t have the right to take it away. Or we decide the one who’s been waiting should get their turn and the other needs to surrender the remote. Keeping the peace becomes the priority, so discerning fairness is the default approach. HOWEVER, is this the best approach?
What if our priority shouldn’t be fairness or keeping the peace? What if peacemaking requires a different approach? What if peacemaking requires us to not take a side, but rather call out the real problem.
The real issue isn’t fairness. Who had it first or whose turn it should be are far less important than a gracious response. This requires us to acknowledge that both kids are in the wrong because neither is acting graciously.

The real issue is how they handled the conflict in the first place. They were fighting for their personal rights at the expense of the other. Beyond that, their approach included demeaning, name-calling, and demonizing the other.
As a parent, if teaching our kids to be peacemakers and to respond to conflict with love and grace no matter the situation, what is the right response to this situation?

Shifting Gears
We have officially entered week six of COVID-19 quarantine. The isolation, fear, frustration, and discouragement are being felt by everyone. This is hard and it isn’t getting any easier. We have been asked to surrender personal freedoms and accept significant restrictions for the sake of “flattening the curve” and protecting those most vulnerable among us.
Some see the restrictions as necessary and appropriate for the sake of loving our neighbor and being submissive to the leadership God has placed over us. They believe government officials have more information than they have access to and have the best of intentions for what they are doing.

Others believe the restrictions are arbitrary and oppressive. They take COVID-19 seriously but believe that mitigating the spread of the virus could still be accomplished by lightening some of the restrictions. They are concerned about the unintended consequences of keeping people from working, shutting down the economy, and severely restricting freedom of movement. They recognize that domestic violence, addiction, and suicidality are all on the rise as a result of the shutdown and are concerned about the trajectory of where all of this is taking us.
Unfortunately, we live in a world where more than one thing seemingly can’t be true at the same time.

• If I’m pro-life . . . I must not have any empathy for young women facing impossible circumstances.
• If I’m pro-capitalism . . . I must not be concerned with the millions of Americans who are unable to earn a living wage and stuck in a cycle of poverty.
• If I am anti-illegal immigration . . . I must be heartless toward the millions of refugees and illegal immigrants desperately in need of asylum as they flee hostile and dangerous contexts all around the world.
• If I am pro-traditional marriage . . . I must be anti-anyone who identifies as LGBTQIA. This cannot be the posture that Christians take. We have the mind of Christ. We have access to heavenly wisdom that is not bound by the reductionistic arguments prevalent in our culture. We must possess the
ability to hold the tension of two seemingly incongruous truths at the same time. We can not fall prey to overly-reductionistic arguments that force us to have polarizing views on complicated issues.

It seems that there are at least five things true all at the same time as we face this national emergency:

• COVID-19 has now contributed to the death of over 30K in the USA and should be taken seriously.
• Submitting to the governing authorities God has placed over us is right and necessary.
• We are called to loving our neighbors which requires us to take proper precautions to protect one another, especially the vulnerable.
• We should be concerned about the inevitable unintended consequences surfacing as a result of the economic shutdown and quarantine – including domestic violence, addictions on the rise, and depression/suicidality.
• Government officials (from both parties) have competing agendas they are juggling and are vulnerable to both under and overreact to any crisis.

What if all five of these things are true? Then what does it look like to respond with wisdom? What do we do when we believe that one or more of these should be prioritized over the others? Is it acceptable to disagree with the order of importance of each of these? And most importantly, going back to our thought experiment, how does our Heavenly Father expect us to reconcile those differences?

Two passages of Scripture I want us to consider:

Do not let any unwholesome talk come out of your mouths, but only what is helpful for building others up according to their needs, that it may benefit those who listen. And do not grieve the Holy Spirit of God, with whom you were sealed for the day of redemption. Get rid of all bitterness, rage, and anger, brawling and slander, along with every form of malice. Be kind and compassionate to one another, forgiving each other, just as in Christ God forgave you. Eph 4:29-32

These passages seem to clearly teach that our words, our intent, and our attitude toward one another matter to God. Name-calling, the use of demeaning language toward one another, accusing an individual of being an idiot, unpatriotic, a blind and dumb sheep, unchristian, uncaring, or other disparaging terminology are all clearly off-limits. Demonizing anyone because you disagree with them is harmful to the name of Christ.
What if our greatest problem isn’t COVID-19? What if our greatest challenge isn’t the fear that this virus and its reaction has elicited? What if our primary issue isn’t even that we disagree over what our greatest concern should be?

What if our Heavenly Father’s chief concern was how we were treating each other in the midst of it all? What if He is displeased with His children when they attempt to tie Him to a political party or political issue? What if He is deeply grieved over how His children are treating one another?
It is as though God has entered the room after hearing his kids arguing and we are attempting to get Him to side with our position.

(Position #1) Obviously, He is clearly more concerned with our definition of loving our neighbor and appreciates our willingness to submit to the authorities He has placed over us.

(Position #2) Nope, He is more concerned with us caring for people by giving them back their right to work and helping guard against the unintended consequences looming in the midst of it.) He hears us name-calling, demeaning, demonizing, and disparaging one another all in the name of claiming the moral high ground. Do we really believe that He is going to look at that conflict and decide we deserve the remote? Or. . . is His heart grieved over how His children are treating one another and how his name is being defamed as a result? What if how we are treating one another, how we engage in disagreements, and our social media posts matter more than we realize?

What if being defined by our love for one another actually mattered more than personal rights? What if surrendering the remote was the most beautiful and powerful step we could take? What if our social media posts reflected His heart more than our positions? What if we really could trust Him to work for
our good and His glory in the midst of this COVID-19 quarantine?